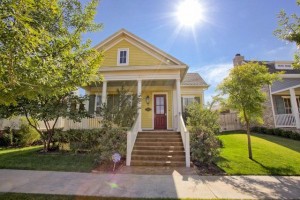 Looking for a new home or real estate around the Cooper area in Lubbock? View our Cooper Homes for Sale.

In 1936, in an effort to offer further education to rural students, Slide, Barton, Woodrow, New Hope, and Union schools were consolidated to create Cooper Rural High School, District Number One. Named for county board member George C. Cooper, Cooper Rural High School, or as it would later be called, Cooper School, began with the construction of an $84,000 elementary and high school building in the Woodrow community, which still stands today.

The doors of the first official Cooper School building opened in 1938 under the leadership of Cooper’s first superintendent, B. M. Hays. With the completion of construction of the new building, the five original consolidated elementary schools were made defunct and Cooper became fully operational.

Upon opening, Cooper Rural High School offered two years of Vocational Agriculture to boys and Vocational Home Economics to girls and offered typing, bookkeeping, and music classes to all students. Rural schools in Lubbock County were considered to be among the most successful in the state of Texas. Aside from an enrollment drop during World War II, Cooper School experienced substantial year-to-year growth under the leadership of superintendents Anthony, Deering, and Nicholas.

In 1962, the building now known as Lubbock-Cooper South Elementary opened, the second free-standing building addition to the district. This building would serve as the only Cooper Elementary for forty years. Almost a decade later, the building now known as Lubbock-Cooper Middle School was constructed to serve as the new Cooper High School. The district was under nearly constant construction for the next several years, with a gym, agricultural building, and wings added as necessary. This construction was overseen by superintendents Spears, Owen, and Carpenter.

This period of construction and physical growth also brought about the need for a more distinguishable title for the district, which led to the transition from Cooper School to Lubbock-Cooper. Under the leadership of superintendents Vinson and Caplinger, Lubbock-Cooper developed a name for itself as far more than a little country school nestled within the cotton fields of South Lubbock County.

In the mid-1990s, the reputation of Lubbock-Cooper as an academically-driven, close-knit, technologically current school district began to draw families hoping to offer their children a top-notch education in a community-oriented environment. Under the leadership of Lubbock-Cooper’s longest-serving Superintendent Pat Henderson, Lubbock-Cooper North Elementary was opened in 2002, the second LCISD elementary school.

Carrying on a longstanding tradition of excellence, Lubbock-Cooper ISD is now a 5A district boasting several years of recognized and exemplary TEA statuses. LCISD schools hold several titles for academic and athletic competitions, and the demand for a Lubbock-Cooper education is so overwhelming that the district does not currently accept transfer students.

Though the graduating class of 2013 was approximately seventeen times larger than the 1937 graduating class of Cooper Rural High School, the district has successfully maintained a hometown environment, while offering opportunities afforded to students in larger, more urbanized districts, and if the past is any indication of the future, Lubbock-Cooper Independent School District has decades of success and excellence to look forward to.

Visit our contact us page for contact information including phone, fax, and email. We look forward to helping you with your Lubbock real estate needs.